Coach Kelley served as the Defensive Coordinator at QO for 5 seasons before taking over as head coach. This included back to back state championship game appearances in 2011 and 2012. During that time Kelley’s defense has allowed an average of 8.1 PAPG. Quince Orchard has also had three Defensive players named to the Washington-Post first team All-Met during his run as defensive Coordinator. QO has also had three defensive players earn consensus all-state honors.

Prior to joining Quince Orchard, Coach Kelley was an assistant coach at the college level for 6 seasons. In 2003 he was a student assistant to the defensive coordinator at Towson University. He moved on to Wesley College in 2004 and was the linebacker’s coach.  Kelley spent the 2005 and 2006 season working at the University of Maryland. During 2005 he was a defensive intern working with the secondary. In 2006 he was an Offensive intern working with the Running backs. He was also a member of the 2007 Champs Sports Bowl team.  Kelley spent the 2007-2008 season as the defensive line coach at North Carolina Central University.

Kelley is a 2004 graduate of Towson University where he earned a degree in Sport Studies with a minor in Psychology. He also played DE and DT on the Towson University football team. Kelley was team co-captain in 2002. He attended Seneca Valley High School where he was a member of teams who won back to back state championships in 1997 and 1998. He was also first team All-Met by the Washington Post in 1998. Kelley is married to Jill Kelley who teaches at Racheal Carson Elementary. They have three children daughters, Molly 9 and Brooklyn 7 and son Brady 5. 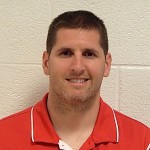